I started a search for more information on this framework, not knowing exactly what I was looking for, after reading the excellent book “Team of Teams” where there is an extensive discussion on the differences between complicated and complex systems.1 This is one of those intuitive concepts that exists that many of us have simply not looked at closely enough. Complicated and complex systems exist within this larger system known as a Cynefin Framework.2 Cynefin (pronounced ki-neh-vin) is a Welsh term that means “a place of multiple belongings” and in practice is organized as a sense-making model. In sense-making models patterns emerge from the framework; as opposed to a categorization model where framework precedes the data.3 There are four domains contained within the Cynefin framework: simple and complicated are in the ordered realm, and complex and chaotic are in the unordered.2 Not knowing which domain you currently fall in means you are in the realm of disorder.


There is an interaction effect that comes from the execution of a deliberate strategy, where most of us begin in the development of a training culture/program, as one deals with the introduction of new and uncertain information. The interaction of a deliberate plan with this new information represents an emergent strategy as we attempt to re-orient ourselves and plot a new course that will bring us to our intended destination; in this case we would term this a targeted physical performance.4,5 There is always the possibility that we can orient things better and more in line with a more deliberate strategy if we can take advantage of previous knowledge and experience but for many of us the vast majority of the time we are adapting to things we could not have planned for in advance. Having the ability and willingness to alter course and better triangulate our current position is adaptive readiness.6


The intent with this framework is to manage strategy and tactics from the complicated and complex domains as we all know that what starts as simple quickly changes in development.3 For example with strength training early gains are in fact simple and bring about much change; however, over time a more complicated or complex relationship emerges as passed a specific point strength does not bring about the same changes in specific abilities or sports performance as before. Seen in this way identifying a simple relationship between strength and other abilities in the early stages will bring about complacence, and eventually chaos, if we assume that this is the only ability we need to continue to address.2


An important distinction in this framework is how we go about addressing issues specific to each domain. In the ordered realm establishing sense comes first, as it should be able to be achieved mechanistically in a straight forward fashion, but in the unordered you probe or act first in order to establish your next steps. Response to your initial information gathering is critical but depends on the domain you are within. In all domains except for the simple there may be additional expertise or perspective required. It’s also important to note that “best practice” is reflective and therefore in the simple domain. In the remaining domains practice may be shaped more by unknowns where a direct response weighed against previous experience may not always be possible. 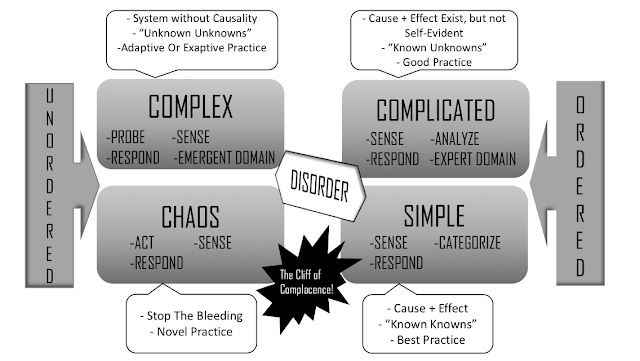 This can be seen in virtually every relationship that contributes to sports performance as specific energetic and mechanistic factors will co-vary across the spectrum as the body determines how to self-organize, coordinate, and regulate a specific stressor. For example vertical jump performance on a barbell or trap bar squat jump across the load-velocity spectrum, basically loading from a low percentage to progressively higher percentages, will be influenced by force-length and force-velocity relationships so range of motion and speed of movement will change in a way that makes their comparison difficult as each load will be limited by different mechanisms. It would be better to identify a specific range, or bandwidth, from which to target both measurement and specific future improvements (i.e. ballistics @ bodyweight or slightly above or below, speed-strength from 10-40% bodyweight, and strength-speed from 40-80+ % bodyweight).


From a practical perspective many choose a mixed methods approach as many are wary of moving too far away from specific qualities for too long.7 Research demonstrates that the earlier someone is in training age the more generalized the effects are of strength or power training.10 However as they advance there will be improvements of a more velocity specific nature as noted here by Prue Cormie, “the current data support the theory of velocity specificity and the notion that relatively weak or inexperienced subjects display relatively non-specific adaptations to training when compared with stronger, more experienced athletes.”10 So while a mixed methods approach may simplify parts of our analysis it can at times represent an over-simplification depending on specific constraints; notably the level of the athlete and time available. There has to be consideration for these factors and how they influence programming as while mixed methods may provide the cross-section we want to see for many it may lack in the density needed to drive further improvements. For these athletes the horizontal sequencing of training and how future training is potentiated by previous training, at the mesocycle and microcycle level, is far more important.8,9


“Anecdotes are persuasive but not objective, numbers are objective but not persuasive. When you put the two together you’re in a very different position.” – Professor Dave Snowden


There is much discussion on the evolution of sports performance and sports sciences in our field. Many classic strength & conditioning professionals find the idea of sport science off-putting as there has always been a science to sport. Further the idea that we now have professionals whose sole responsibility often is the tracking and analysis of data specific to sports performance is a classic apples versus oranges scenario as before, and often to this day, there simply was no room in a budget or staff for more professionals diluting the environment and program with more information; especially if that information was often determined to be non-actionable.5 What we all sense is our primary need is the ability to take stronger action on the things we believe will make a difference in the performance of athletes in our care. But that is all changing rapidly and understanding the Cynefin framework can go a long way in understanding how we can become both more efficient and effective in this new environment.

Any aspiring strength & conditioning or sports performance coach, or sport scientist for that matter, should understand that in many environments it is not a lack of knowledge or experience holding many programs back. The success and capabilities of a good sports performance/strength & conditioning program should be evaluated by the efficient and effective use of their resources, processes, and priorities.4 Resources are primarily the staff, equipment available, technology, and relationships. Processes are the way in which your resources, notably your staff, communicate and coordinate their work.4 Resources and processes balance each other out as you can have good resources and bad process, or vice-versa, and your program will still be garbage. How your organization makes decisions on how to go about using your resources and processes is a statement on what your priorities actually are as a program.4


There are many programs who sacrifice effectiveness for efficiency, because of their belief in what their organization’s capabilities are, when that did not have to be the case. Using my own constraints as an example I allowed the fact that the University program I work with 1) does not have a varsity weight room, 2) has one set of dumbbells for the entire weight room, and 3) has only half racks available hold our programming and strength & conditioning back for some time (I have been there for 8-years). What we lack in facility resources we can to a large extent make up for in good process to make our program highly efficient while not sacrificing effectiveness.


What’s the difference between effectiveness and efficiency? According to Peter Drucker, “Efficiency is doing things right, effectiveness is doing the right thing.” If using a Cynefin framework, or even simply a sport scientist dedicated to deeper analysis that can support the sport coach and/or strength & conditioning environment, can help validate your position and clarify role delineation at every level of your program more effectively, from staff to athletes, then there is no good reason either should not be a tremendous aid to further development. Putting good project management, good data analysis, and a good coaching staff together is a win-win.


A Word on Forest Eco-Systems

This is a more in-depth example of how a Cynefin framework can play out in ecology via notes taken directly from a lecture by Professor Dave Snowden.3


-          - As a Mature System under Resource Starvation with Increased
Specialization the System, when it Receives any Form of Shock, May Collapse
Catastrophically
-          - The Whole Cycle Starts Again


-          - You Cannot Disrupt this System by Working Within It; The Only Way is By
Extending Outside the System to Change the Eco-System enough to Shift It
Back by Disrupting It Enough so Stabilized Niches Cannot Expand

It is not a stretch and should be fairly obvious to all just how well this parallels athlete development in our current era of hyper-specialization. For the purpose of clarity I have changed 8 words from the above notes below:


-          - ATHLETE becomes Resilient and Robust (Resilience is Surviving Change
with Continuity of Identity; Robustness is what Survives Unchanged)


-          - As a Mature System under Resource Starvation with Increased
Specialization the System, when it Receives any Form of Shock, May Collapse
Catastrophically


-          - You Cannot Disrupt this System by Working Within It; The Only Way is By
Extending Outside the System to Change the Eco-System enough to Shift It
Back by Disrupting It Enough so Stabilized Niches Cannot Expand

If correcting such issues were as simple as inserting more rotator cuff work or strength training this would not be the epidemic that it is. As also mentioned from Professor Snowden how many of us have successfully gone about such a
transformation with a teenager or similar population?3 It simply does not happen that way as there are values and beliefs deeply entrenched behind the damage that has been done.


“Anybody who draws a human system as a series of boxes with arrows like an engineering flow diagram ain’t understanding humanity.” – Professor Dave Snowden


In this perspective planning is not the issue, over-planning is. Simple is not the issue, oversimplification is. The theory of disruptive innovation can help many of us to understand just how we may effectively create a course correction to positively influence teams and athletes of this era. This theory and its practice is used successfully by everyone from terrorist organizations to Silicon Valley start-ups (whether they know it or not).4 Put simply we are never going to be effective going head to head against an entire value and development system that has been created. What we can be effective at is identifying a weak link, an opportunity in the market if you will, and providing innovation to overcome that weak link (with innovation defined as “a new method, idea, product, etc.”).4 Then if possible we use that initial opportunity to alter the eco-system entirely. As discussed before here that innovation could point back towards strength training but it could just as well point back towards mobility, aerobic capacity, character, etc. The closer this innovation strikes at the team or athlete’s purpose (WHAT is their WHY) the more disruptive this process will be to their current ways and that is as simple as it gets.


10. Cormie Prue, McGuigan Michael R, Newton Robert U. “Influence of Strength on Magnitude and Mechanisms of Adaptation to Power Training” Medicine & Science in Sports & Exercise. (2010)
Posted by EliteVolleyballPerformance at 8:25 AM 1 comment: